Posted on June 22, 2018 by Cape Cod Women for Change Leave a comment

(You can help immigrants here in MA – see this post: Call to Action! Immigration, time-sensitive quick and easy action you can take to protect immigrants in MA)

As a member of *Indivisible, we want to share a new federal policy statement they just released:

(1) Stop a bad immigration bill from passing. This Thursday the House (CONGRESS) is expected to vote on an immigration bill that has a good chance of passing. It is an extreme, anti-immigrant bill that will cause a lot of harm to immigrant families and includes bad provisions on family separation. If you care about keeping families together, you don’t want to see this bill pass. This vote could could go either way so it’s important that we do what we can to stop it. For a full breakdown of the bill and why it’s so bad, go to our resource: https://www.indivisible.org/resource/queen-hill-breaking-four-immigration-proposals-play/

(2) Stopping Trump’s zero-tolerance policy (ZTP). We’re not going to completely stop family separations at the border. We’re also not going to stop family separations that are happening every day across the country under Trump. However, the ZTP is so unpopular and so toxic that there really is an opportunity to get a positive change in policy. There is Dem unity here that we haven’t seen since healthcare. And there are cracks here on the Republican side that we’ve never seen. So that means this is winnable.

(3) Preventing Bad Solutions. As we write this, Senators Cruz and Cornyn are working on a Republican proposal that purports to end family separation and the Trump administration is said to be drafting an EO for him to sign. Earlier this week, Sen. Cruz released text of his version of a fix.  Summary: It’s a bad bill. It speeds up the removal of asylum seekers and immigrants crossing the border, removes protections against indefinitely detaining children, and provides for family immigration detention. We need to make sure that neither the Cruz bill nor whatever the Cruz-Cornyn proposal ends up being will pass. We’re right now hearing that moderate Democrats are considering going along with this, and we need to make sure Democrats stick together and not accept these options.

What are our asks?

We want all MoCs to vote AGAINST the Ryan bill. All of the things that we’ve been worried about since Trump took office are happening — and this bill gives him even more. It would cause unimaginable harm to millions of families. This is the most important thing for us to do this week.

On family separation, we are pushing the Keep Families Together Act (Feinstein in the Senate; Nadler in the House). This bill would effectively stop family separations at the border under the ZTP. This bill is endorsed by the groups that are experts on this, including Kids in Need of Defense, Women’s Refugee Commission, Children’s Law Center, and AAP.

Note that for Dems who have already signed onto the Families Belong Together Act, our ask to them is to defund hate: to defund ICE (Immigration and Customs Enforcement) and CBP (US Customs and Border Patrol).  Since Trump took office, ICE and CBP have terrorized immigrant communities, ripped undocumented parents away from their American born children, and harassed immigrants and people of color at schools, courthouses, and workplaces. This latest turn of events only further underscore the need to hold these agencies accountable and that we need to reduce funding for these agencies.

Does the Keep Families Together Act solve the problem?

It deals with the immediate problem, Trump’s family separation policy.  It would prevent family separations, while leaving in place the legal requirements to release kids after 20 days — i.e., undoing the ZTP. But we realize that the problem is much larger than what is happening under the ZTP. Family separations happened under Obama. They happen every single day in every part of the country. ICE and CBP are going after families and violating their own policies when they do it. The Keep Families Together Act isn’t a silver bullet, but it does stop the zero-tolerance policy that is causing the new separations at the border.

Why aren’t we doing more to address root causes, like violence in Central America, or focusing on other attacks against immigrants?

We would love to do more to address root causes and other attacks. However, we don’t control the agenda and so we can’t force Republicans to do what we want. What we can do is focus energy to defend the things that we care about. Right now there is momentum in Congress to do something about family separation, and so where we have strength and where we can make a difference is in blocking bad bills, or mitigating harm in the bills that pass. We can’t do more on the root causes until we’ve taken back Congress — and even then it’s going to be hard to get Dems to do more.

*What is Indivisible? Read this downloadable form pdf: ABOUT INDIVISIBLE 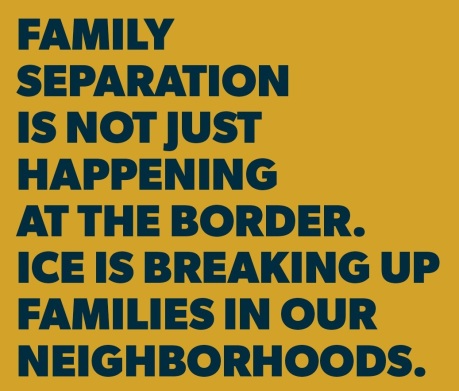 JOIN US! Women’s Voices Matter, A Panel Discussion with The ACLU and NARAL

Help us keep this movement growing with a donation to Cape Cod Women for Change. Every little bit helps!