‘Be the Dragon!’ Thoughts on our righteous anger

Recently, I have been reading Rebecca Traister’s Good and Mad, about the amazing history of the women’s movement and the often unspoken anger that propels it. It is not new to me that women are viewed and judged differently to men; that a woman speaking passionately is often deemed hysterical; that a wronged woman is characterized crazy; that an ambitious woman is called bitch. Studies have shown that the public views some traits in men favorably, but mistrusts the same traits in women.

But I never fully examined my own views on women’s anger, the subtle conditioning I was raised with and perhaps inadvertently socialized my own daughters by, until recently. I was taught that you can get further with honey than with vinegar, that it’s better to sweet talk someone than challenge their ego. I never really agreed with that classic kind of female manipulation, but I did attempt to dilute the expression of my anger, to use cool logic and rhetorical argument rather than curse words or insults. In order to be taken seriously or to be successful, professional women must polish this skill to an art form. No one wants to be unattractive or undesirable and that’s powerful motivation for young women to learn to rein in any angry impulse.

While raising my own daughters I tried to temper their anger in order to help them; I knew that female anger puts people off and I wanted them to use their anger in more “socially acceptable” ways. I would have to say that I was not always comfortable with this, especially in the face of what was often righteous anger. Why shouldn’t they punch the little boy who won’t stop grabbing pigtails or tell the street harasser to ‘Fuck himself’? Even now, I feel a little unease reporting that my girls did this – regularly – but that’s my problem, and, happily, not theirs. Thankfully, I realize that I was not successful at socializing away their righteous anger – because it is righteous. They are entitled to it just as much as any boy or man and entitled to express it.

Since the election of 2016, overwhelming anger has monopolized the lives of many women whether they recognize it or not. Acceptance of our righteous anger is hard to gain not only in the public sphere, but in private, within ourselves. There is no doubt that some people found the women’s marches distasteful because of their own unexamined aversion to female anger. I am sure that is why some women reacted so strongly against pussy hats and vulgar signs. Most of us have now accepted we are indeed angry, but we need to embrace it, not worry what it will do to us. Our anger is righteous and we are entitled to it and used correctly it will save us.

I have often described what I feel as a dragon that will consume me if I do not stay on top of it. When my friends worry about spiraling down under the heavy despair of what essentially is their anger, I advise them to stay on top of it, to use that energy to motivate and propel. I then tell them about my dragon. How I must ride this dragon and not let down my guard or it will eat me alive. Dragons (and anger) can do that, they say. I have never felt that I am battling it, or trying to conquer it, I am just using it to fight my crusade. And it’s a powerful dragon and I am quite enjoying learning how to ride it!

I know that this dragon I ride is my anger and that I have internalized the idea that this anger is not a socially acceptable thing for me to own or display. One of my daughters helped me to realize this. When I told her about my dragon, she was amused. When I asked what she was laughing at she simply said, “I don’t ride the dragon; I am the dragon.”

She’s right. We are the dragons. Our anger is not something separate from us that we must control and steer. It is a valid and righteous part of us; a reaction to a lifetime of mistreatment and inequity; a response to the memories of our mothers and grandmothers. She and other young women of her generation reject what they see in our world with a proud and righteous indignation and an unapologetic ‘fuck off’ to the patriarchy. They are the MeToo and TimesUp generation and they just aren’t having it anymore.

And we must learn from them to be the dragon!

(Author’s note: Apologies if some of the language here has offended; my dragon made me publish all the words!)

Laurie Veninger is one of Cape Cod Women for Change’s leadership group, as well as a leader of Indivisible Outer Cape. She has a PhD in Linguistics and is a passionate advocate for women’s rights. We are lucky to have her passion, energy, dedication and leadership skills. 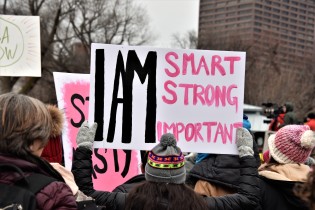