THANK YOU PAUL! Will Crocker has filed bills and voted against women, families and LGBTQ, Paul Cusack will actually represent us!

Thank you to Paul and his hard-working team for a hard fought race. This was the closest race against a state rep incumbent here on the Cape.

We will be watching our legislators’ sponsorships and votes. 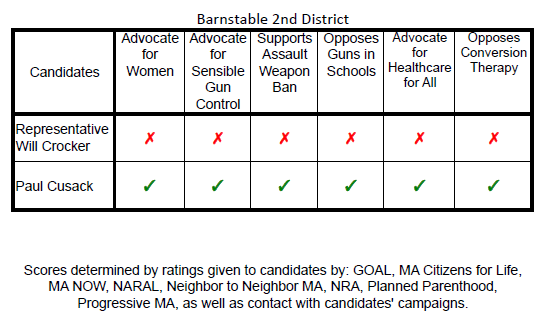 During the two years since Will Crocker was elected, he has done little for ALL of us, while pushing an agenda for the far right. The people in the 2nd Barnstable District deserve better.

We have the opportunity to elect Paul Cusack as our State Representative.  Cusack, a combat veteran, an Army Ranger- Special Ops who has education and experience in government and policy, will represent ALL of us.  The Cape Cod Times agrees and has endorsed Paul Cusack for State Representative.  Additionally, the Times recently discovered something that Cusack hadn’t shared with them- here is a piece from this great article:

Cusack is a recipient of the prestigious Soldier’s Medal, the highest honor bestowed by the U.S. Army for valor off the battlefield, an organization that advocates for veterans seeking elective office told the Times this week.
The medal was awarded for Cusack’s actions in the moments after the explosions at the 2013 Boston Marathon.
Cusack has not brought attention to the honor while on the campaign trail.

While Crocker’s many campaign mailings – funded by thousands of dollars donated by GOP movers and shakers and local developers (hence signs all over business properties owned by developers) – tout his efforts to “keep us safe” and describes money he has brought back to local towns, while he has actually been working against rights and services for women, children, and the LGBTQ community.

Cusack will support efforts that help public safety officials “keep us safe,” and will work with towns to bring money back to our community. This is standard for most State Reps.

Often when we talk to people about legislators’ records, we find that many are surprised at what their state legislators have been up to. Much of their legislative records aren’t published in local papers. In some cases, like Rep Crocker during his first term, it would seem hey prefer we not know.

These are just some of the bills Crocker sponsored and votes he has taken while acting as our state rep and his declared positions on ballot questions:

We are lucky Paul Cusack is asking to be our State Representative for the Second Barnstable District. 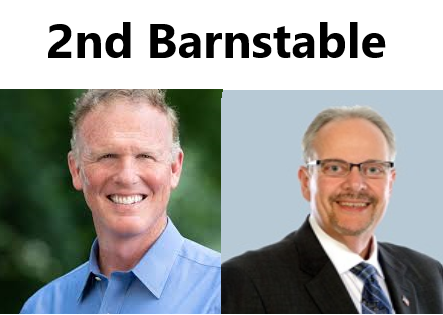 Does your state legislator support or oppose legislation that benefits women? These are Cape & Islands Senators’ and House Reps’ grades and endorsements regarding women’s issues

Update- this did NOT PASS. Our state is now supporting sheriffs who Call to Action, Time-sensitive! PROTECT IMMIGRANTS IN MA: Quick and easy action you can take to protect immigrants in MA