Whelan won this election. Thank you to Steve and his hard-working team! We will continue to watch our state representative’s bill sponsorships and votes.

We are republishing this post with updates for your election consideration.

First Barnstable District. (What district are you in? Check here)

Steve Leibowitz has been involved in the political arena for years. He understands and supports the issues important to us. He will communicate with us, meet with us and work with us.  Tim Whelan has never been available to speak with us when we visit the state house and whenever there is an important issue that he won’t support, he simply does not respond to us. When a constituent contacts a legislator, support or opposition should be discussed. A legislator should represent ALL of his or her constituents.

In the most recent legislative session, Tim Whelan has voted against important legislation:

Most of the GOP legislators in MA, like our current Congress, want to remove “entitlements” for lower-income people, families, and seniors in need. Most of those who accept entitlements and can work, are working. The cost of living in this state is high, and if we don’t offer support to lower-income residents in MA, we will lose a valuable segment of our workforce and important members of our communities. Whelan’s vote signals he will join Charlie Baker in fighting entitlements for our low-income residents.

Guns. When it comes to protecting our safety, Whelan, like most legislators of both parties, supports our public safety workers. But he has not only opposed common sense gun legislation, his record on guns is a major concern for us:

We need to know that our legislators are representing all of us, not just the NRA and their MA affiliate, GOAL and the Republican party.

Here is a simple graphic to help understand the differences between the two candidates. 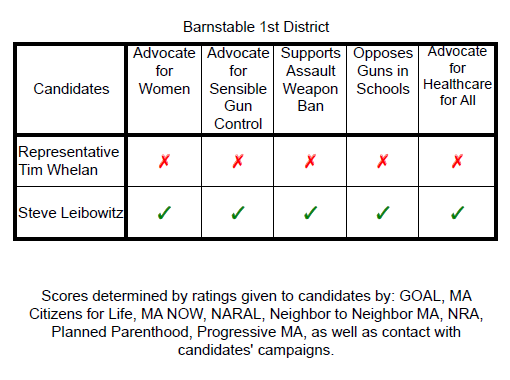 Know before you vote, how does your State Rep and State Senator rate on guns?