TIME IS RUNNING OUT: Contact legislators, tell them to STOP child marriage in MA!

Posted on February 2, 2018 by Cape Cod Women for Change Leave a comment

THIS BILL DID NOT GET VOTED OUT OF COMMITTEE. WHY NOT?  WE ARE ASKING THOSE QUESTIONS AND WILL LET YOU KNOW.

MEANTIME, REMEMBER THIS WHEN YOU ARE VOTING FOR STATE LEGISLATORS. ASK THEM TO COMMIT TO SUPPORTING THIS BILL NEXT YEAR. LEARN THEIR POSITION ON THIS BILL AND OTHER BILLS THAT IMPACT WOMEN.  (stay tuned)

Do you know in Massachusetts there is no minimum age to be married?

Do you know that that girls as young as 14 are being forced to marry much older men?

This essentially legalizes sex with an under-aged girl, an act that would otherwise be considered illegal under Massachusetts statutory rape laws.

Furthermore, girls who marry as young teens are often trapped in abusive relationships, denied schooling, and are no longer eligible for any of the usual social safety nets provided for other children.

We have chance to stop this, but there’s not much time left!  The Act to End Child Marriage in MA (H2310/S785) is currently in the Judicial Committee and must be voted out of this committee before February 7, 2018.

We need your voices to move this legislation forward. NOW.

If each of us takes a few minutes to make these contacts, the legislators we reach will know this bill is important to a growing number of voters.  Need a pep-talk about contacting legislators? Read this post.

Please contact your own state senator and state rep, simply tell them you support this legislation and ask them to write a letter asking that this bill be voted out of committee and moved to the floor for a vote of the full legislature. Cape and Islands state senators and house reps contact here, all others find your senators and reps here.

We are all busy, but this is one of those issues that needs as many individual voices as we can muster. We need to let our legislators know we are paying attention to this issue.

EMAIL MEMBERS OF THE JUDICIAL COMMITTEE

The next step is to email the members of the committee that has the bill, and who, if they don’t vote it out of committee will kill the bill.

Below is a sample letter and the email addresses of the Judicial Committee members. It is always better to write a personal note; if it helps copy/paste this letter and make any changes or use as is.

Women’s rights are under attack at all levels of government, at the very least, we should be able to establish policies that allow young women and girls here in Massachusetts to reach their full potential.

Thank you for giving your voice to this issue, it really does make a difference.

I fully endorse H2310/S785 An Act to End Child Marriage in Massachusetts and am deeply concerned that child marriage poses a wide array of problems both for young girls and the entire constellation of families surrounding them. Early marriage promotes lives fraught with difficulty in accessing educational opportunities, successful earning capacities and increases risks of domestic violence and poverty.

The Massachusetts Legislature has done important work to support protections under the federal Violence Against Women Act and the Massachusetts Domestic Violence Protections and now with this bill Representative Kay Kahn and Senator Harriette Chandler are working to expand the safety net for these young women/girls.

Thank you for your consideration.

We’d love to hear what responses you get from legislators, either here in the comments on this post, or send us an email: CapeCodWomenforChange@gmail.com.

If you use twitter, please share your support for these bills, and include any of the members of the committee in your messages: #S785 #H2310. (Note – Twitter should not replace an email, but it is a good way to share your support after you make contact.) 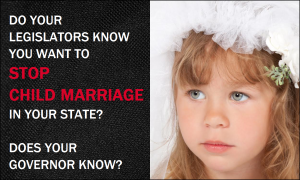