CALL TO ACTION Trump Legitimizes the Alt-Right, we must fight back

Posted on August 16, 2017 by Cape Cod Women for Change Leave a comment

YOU CAN TAKE ACTION NOW.  It only takes an email to a CEO!

After Heather Heyer was murdered by a white nationalist, Nazi sympathizer in Charlottesville, VA, Saturday, Donald Trump has failed to comfort the nation and has incited hate groups.

Saturday he attempted to speak in the phrases written for him but strayed and said “all sides were to blame.” Monday he stuck to the phrases written for him and there was a glimmer of hope, until Tuesday when he returned to his own “all sides are to blame” rhetoric, defending the nazi-sympathizers and making former KKK leader David Duke, and other’s in the “alt-right,” giddy.   He has legitimized these groups, and we cannot stand by and do nothing.

What can we do? We can demand that our elected representatives acknowledge Trump is only throwing fuel on a dangerous fire, and denounce him.  We can use social media to insist GOP leaders and elected officials use their own voices to counter Trumps.

AND, You can use your voice and your wallet!

(THE MEMBERS OF THIS COUNCIL AND HIS OTHER BUSINESS COUNCIL RESIGNED!) There is a movement that has been prompted by Shannon Coulter, the woman who started the #GrabYourWallet movement that among other things helped prompt FOX to remove Bill O’Reilly.

Using social media, Coulter is now sharing a spreadsheet that includes CEOs who are members of Trump’s Manufacturing Council and contact information.  Trump is proud of his relationships with businesses and some of the most powerful CEO’s in our country sit on that council. But, as of this moment, seven members of his council have resigned. The New York Times is keeping a running list: The C.E.O.s on (and Off) Trump Councils

Here is a list of the remaining members and their contact information collected from the #GrabYourWallet spreadsheets: Members of Trump’s Manufacturing Council  Use contacts to ask “in light of the CEOs leaving Trump’s manufacturing council, will your CEO remain on Trump’s council given his failure to condemn, and even defense of Nazis and White Nationalists in America?”

Rallies planned for this Sat in Boston

A hate group has requested a permit to rally in Boston on Saturday: as of now Mayor Walsh has not granted a permit and promises, despite the fact that he has to honor their First Amendment rights, the parameters that would be included in their permit will limit them to a point where – hopefully – they may choose to stay away.  If not, they will be met with PEACEFUL RESISTANCE.

And finally we need to ask, how much more will it take for the GOP to turn their backs on Trump and do their best to make sure he does no more policy or international relations damage?

We must remain indivisible and vigilant, we must not put our heads in the sand, turn it off or throw our hands in the air! Resist and Persist.  Speak up and speak out. It really does make a difference. 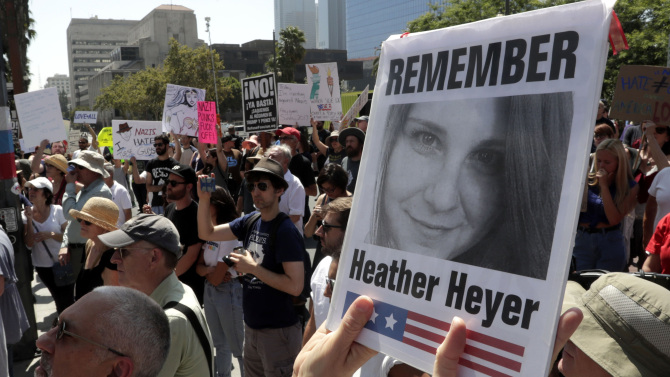 A demonstrator holds up a picture of Heather Heyer during a demonstration in front of City Hall for victims of Charlottesville, Virginia tragedy and against racism in Los Angeles, California, USA, 13 August 2017. Rallies have been planned across the United States to demonstrate opposition to the violence in Charlottesville. According to media reports at least one person was killed and 19 injured after a car hit a crowd of people counter-protesting the ‘Unite the Right’ rally which was scheduled to take place in Charlottesville on 12 August. At least 15 others were injured in clashes during protests. Hundreds demonstrate in downtown Los Angeles for victims of Charlottesville tragedy and against racism, USA – Mandatory Credit: Photo by MIKE NELSON/EPA/REX/Shutterstock (8992648d

Would you like to become more involved in planning and strategy for this group? NO EXPERIENCE REQUIRED. See this post.