IMPORTANT CALL TO ACTION! The Senate will try to push healthcare through after this week’s break. ACT NOW!

Posted on June 28, 2017 by Cape Cod Women for Change Leave a comment

We cannot ignore, assume, or surrender the fight against the GOP plans to decimate healthcare. the process has been insulting and more akin to a to an authoritarian dictatorship, the bill was developed and drawn up in secret, by a committee of 13 men.

The Congressional Budget office has analyzed it and confirmed 22 million people would lose healthcare, and premium costs for those with healthcare will go up – exactly what they say is wrong with the ACA (Obamacare.)

Now Senate Republicans are postponing the vote, the plan is to rewrite it this week – and use the money saved in cuts by reducing or removing our access to healtcare – as a slush fund to help individual senators with issues in their states to get their votes over the July 4th break. (Interesting that they wanted to cut the deficit and are now willing to use that reduction their first bill would created, to buy off Republican senators to get their vote!)

Below is a copy of our earlier post – all the information you need to contact your legislator and help us get to the 10 Senators considered vulnerable.

One of our resisting perSisters has created a set of flash cards and a poster to share with people in the public, at gatherings etc. This was her in Provincetown, and she’s been spotted in Orleans as well.

What is going on in our government right now is atrocious. Thirteen white male U.S. senators are crafting legislation that will impact all of us (and will effect 1/6 of the US economy) in secret, behind closed doors.  Mitch McConnell is going to allow this bill to go to a vote NEXT WEEK without ANY public hearings, and will manipulate rules to prevent any amendments.

Bits and pieces of that legislation are trickling out, and it’s not looking any better than the plan the house passed a couple of months ago. Good article from NPR on the known details.

We must speak up and speak out NOW!! Start by contacting your own Senator, and then contact the Senators identified as vulnerable, who risk losing their seats if they support this bill.

From the National Indivisible team:

Congressional staff tell us that fewer people are calling to voice their concern. That’s not acceptable. The people who want this bill to pass, the people who want to take this country backwards—think our movement is a mile wide and an inch deep. They think you’ll lose interest, get tired, care enough to tweet but not to fight. We have to prove them wrong right now.

What do you say to Democratic senators?
Well it can be as simple as “Thank you for opposing the AHCA and please do all you can to stop it.”  Or if you want to encourage procedures to stop the process, this page gives more detailed scripts.

Republican Senators in vulnerable districts (Hillary won their district in 2016, some are up for re-election in 2018, all risk losing their seats in their next election.) These are the Senators Indivisible tells us to focus on: Susan Collins (ME), Lisa Murkowski (AK), Dean Heller (NV), Shelley Moore Capito (WV), Bill Cassidy (LA), Rob Portman (OH), Tom Cotton (AR), Cory Gardner (CO), Jeff Flake (AZ), Pat Toomey (PA) and Dan Sullivan (AK).

Do you have Facebook friends in these states? There is a way to find out for sure.  This page done by an Indivisible group in MD, has a cool tool helps you find Facebook friends in those states and gives you information to help your friends contact these Senators and urge them to vote against this bill.

This page has scripts for Republican senators.

IMPORTANT! This page also gives you a direct email link to these vulnerable senators’ healthcare staffers – send a message of your own! Remind them that while they represent their states, they are working for the whole country.  Call if you feel the urge. And, you might remind them that we will all work, from all over the country, to support their opponents in their next election.  The GA and SC races weren’t won last night, but they were much closer – single digits –  than 2016 and there is a national momentum that will grow if this bill is passed.

Did you know, The process to pass the ACA (Obamacare) was lengthy, thorough and transparent while Trumpcare has been rushed, negotiated in backrooms, without input from experts, stakeholders, or the public? 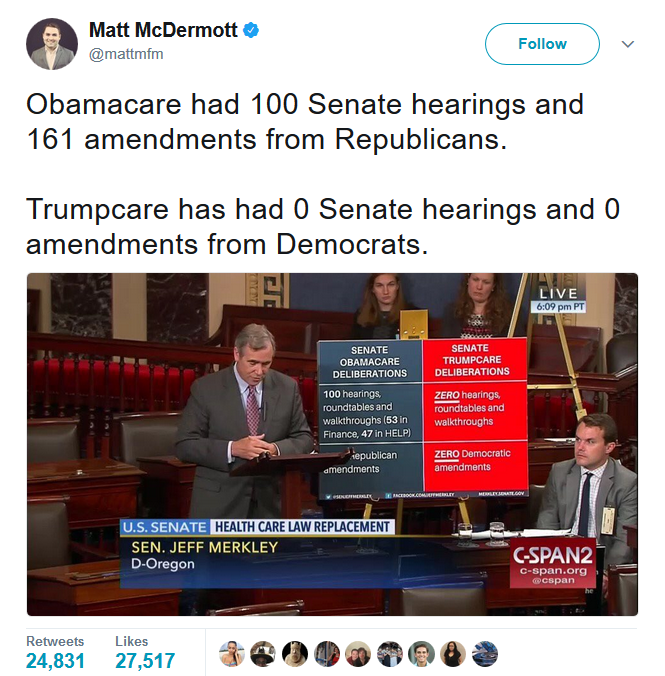 These our own graphics, some are meme’s and most are formatted to print as postcards, please leave the CapeCodWomenforChange.com attribution in the graphic if we’ve added it.

Would you like to become more involved in planning and strategy for this group? NO EXPERIENCE REQUIRED. See this post.