CALL TO ACTION: Planned Parenthood – AT RISK – this is it.

Posted on March 23, 2017 by Cape Cod Women for Change One comment

This vote on the Trump – GOP “repeal and replace” healthcare bill is not just about cutting coverage, increasing premiums, giving tax cuts to the wealthy etc. One aspect that we, as women, must not allow to get lost in the noise is the plan to “defund” Planned Parenthood.

It is SO easy. Just learned about a husband reluctant to do these things who clicked on that link, typed in his zip code and clicked the email option and sent a strong email to his Congressman.  They actually count these calls and emails. Their staff updates them on how many are in favor and how many are against any issue.

And, don’t forget, once you call about Planned Parenthood, contact your Congressman/women to encourage them to fight hard against the GOP repeal and replace plan – see our post about this.

Planned Parenthood is under attack like never before. The federal government is now in the hands of extremist lawmakers who have tried for years to shut down Planned Parenthood health centers and cut patients off from care.

If they succeed, millions will lose the care they rely on each year, with people of color, those with low incomes, and folks in rural areas most affected.

Letters, petitions and emails are important, but we know that calls have the largest impact and grab lawmakers’ attention.

Will you call your U.S. Representative now?

These slides are from an online tele-conference call with national resistance groups where a Planned Parenthood rep spoke: 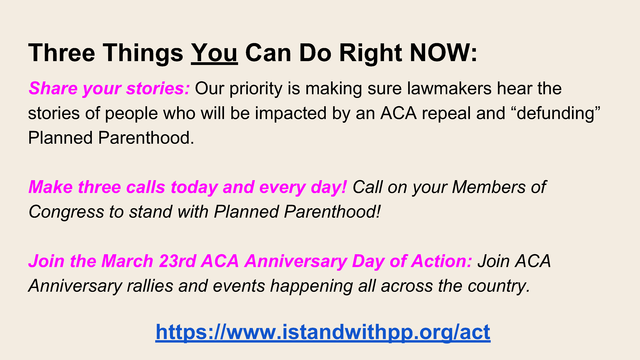