Updated – Urgent Call to Action: Tell your senators vote ‘no’ on Neil Gorsuch, How and Why

CONFIRMATION HEARINGS WERE A LOVE-FEST – FOR GOP!

Please Act. Please contact your Senators! Everything you need is here. 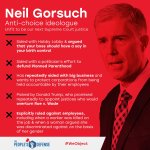 Update: After two hearings for this nominee, it is clear the GOP is enamered with this man. He is well-spoken, self-deprecating and uses words like, gosh, and golly. But when the Democratic members of the committee grilled him on specifics, he cleverly avoided answering. He did answer some questions about speficic cases, like Hobby Lobby, but even that was a dance that left viewers with little insight, or even reassurance, that his right-wing religious background won’t effect his decisions. Meanwhile, Senator Chuck Schumer (D-NY) has made public his intentions to stop the house and senate from moving forward on any Trump-appointments or legislation until questions about his ties to Russia are answered, as more information about his campaign’s involvement with Russia come to light. The FBI probe into Trump and Russia is huge news. Our political … – Vox

Remember, Gorsuch is 50, and this is a lifetime appointment.

With all of the surrounding clatter and noise about Russia and tweets and important issues like healthcare and the budget, we must remain vigilant about our rights as women and the Supreme Judicial Court.  Tell your Senators not to support Neil Gorsuch’s nomination. The FBI probe into Trump and Russia is huge news. Our political … – Vox

There is some debate about whether Democrats should simply support Gorsuch or use the filibuster to delay or kill the nomination. The risk is that Mitch McConnell will remove the filibuster rule. The word from some democratic Senators, organizations that support women and resistance organizations is to urge our Senators to filibuster.

And, at the very least, NO Senator, especially a Democratic Senator, should vote yes on Gorsuch’s nomination – they must vote “no!” Give them a reason, give them a call. Regardless of what happens, the records must reflect their representations of our objections.

Our U.S. Senators must hear from us, we urge you to contact them:

Based on his record, Gorsuch is a serious threat to women’s rights, including our right to choose, our right to birth control, and equality. (Links and paragraphs pulled from excellent articles about this below.) Trump vowed to nominated judges that would overturn Roe v Wade, our Senators must not make this easy for him. Women’s rights matter, they should not be secondary to a clean demeanor and pleasant and open personality, accolades some who support him have used to describe this nominee.

Contact your Senator now: https://www.senate.gov/senators/contact/, a phone call works best, but each senator offers the people they represent other options, including emails. Then, ask others to do the same. Share this post, email it to people who don’t use Facebook – help us get the word out exponentially! (You tell 10 friends, they tell 10 friends and so on…)  If you’ve never done this before here is a Pep Talk.

What should you say?

First, urge your Senators to vote no to end debate on Gorsuch’s nomination. Tell them to filibuster. And if all else fails, as your Senator, you want them to vote NO.

If you need help with what to say, the National Women’s Law Center recommends personalizing the following script: (We’ve added info that has just been recommended Sunday evening, about the filibuster. )

Judge Gorsuch’s record of denying women reproductive health care and his approach to interpreting laws show that legal protections for women would be jeopardized if he were confirmed. He voted in favor of allowing bosses to use their religion to block employees’ birth control access. His extreme approach to the law would undermine regulations that have literally opened the doors of opportunity for women and girls.
Please vote no to end debate on his nomination, filibuster, and if all else fails, vote NO on his nomination.

Share with us, on Facebook or in comments here. Did you call? Email? What were you told. Share how easy it is to tell your Senators what you want them to do.

WHY GORSUCH IS BAD FOR WOMEN:

Though Gorsuch, a federal judge on the 10th U.S. Circuit Court of Appeals, has never ruled on an abortion rights case, his record shows him to be hostile to women’s health care and willing to give broad leeway to institutions that want to discriminate against women.

Cosmopolitan: Trump’s Supreme Court Pick Neil Gorsuch Would Be a Disaster for Women a quick and easy read.

Judge Gorsuch has explicitly praised Justice Scalia’s approach to the law. While he has not opined on Roe v. Wade directly, he voted to override a woman’s coverage of contraception if her boss objected. Justice Scalia was highly skeptical that courts should defer to the interpretation of laws by expert government agencies—and Judge Gorsuch would go even further, making it harder for agencies to implement the laws that have literally opened the doors of opportunity for women and girls. For example, regulations have given life to expanded opportunities for them in the classroom and on the playing field and the right to equal pay. In short, his approach to the law poses devastating risks for women and girls across the country…”

Gorsuch, the son of perhaps the most corrupt head of the Environmental Protection Agency in its history, came down on the side of religious zealots in the notorious case of Sebelius v. Hobby Lobby, Inc., in which the craft chain’s owners won the right to deny their employees contraception coverage despite the ACA’s mandate. In the 10th Circuit’s ruling, Gorsuch attributed to the company the capacity for spiritual reverie. The ACA forced Hobby Lobby to “violate their religious faith” by covering birth control, which “their religion teaches to be gravely wrong,” the ruling stated. Gorsuch described birth control drugs and devices as having the effect of “destroying a fertilized human egg”—a claim that is demonstrably false, even in most cases of emergency contraceptive use.

Gorsuch also joined a dissenting opinion when Little Sisters of the Poor v. Burwell, another challenge to the ACA’s contraceptive mandate, came before the 10th Circuit. The dissent called the mandate a burden to the plaintiffs’ free exercise of religion. In a 1996 amicus brief in a case about physician-assisted suicide, Gorsuch wrote that requiring public hospitals to provide abortions was an instance of “the courts [feeling] free to override the conscience of health care providers.” In other words, Gorsuch believes that doctors, corporations, and individuals should be able to discriminate against women, preventing them from accessing necessary health care, on account of any personal whim they claim to the court.

More recently, Gorsuch wanted to rehear, and likely reverse, a 10th Circuit panel decision blocking Utah’s attempt to defund Planned Parenthood. The movement to defund Planned Parenthood by preventing patients from using Medicaid dollars on nonabortion services there has been based on false claims of illegal fetal tissue sales. Gorsuch gave credence to Utah Gov. Gary Herbert’s claims of such trafficking, which he proffered without any supporting evidence, instead of dismissing them as a political maneuver, as a majority of his fellow judges did.

Please forgive any typos and grammar errors- this was a quickly written post.

Thank you for being our community leaders!

Have you signed up for our newsletter yet?
Use the follow button on the right to receive new posts on this website by email. 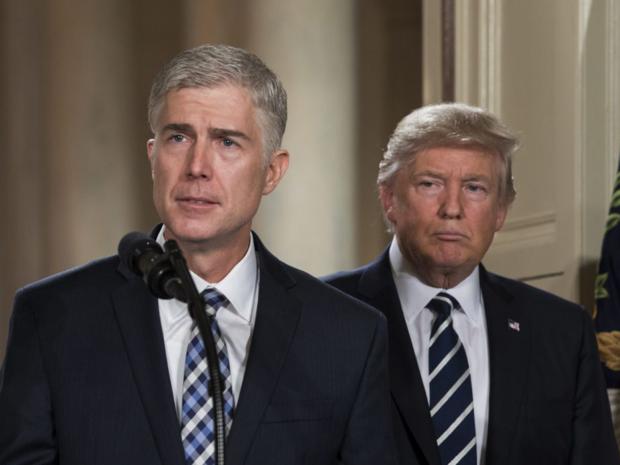