UPDATED Call to Action: Betsy DeVos Education Secretary we must RESIST -Speak out! 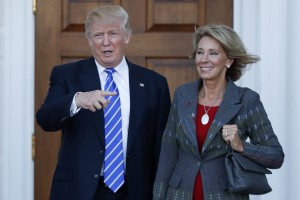 UPDATE: The Senate Health Education Labor and Pensions Committee (HELP) has held hearings on the appointment of Betsy DeVos and we understand a vote will come within days.

Her nomination is of particular concern.  For example, her hearing was postponed because, according to the Washington Post, “DeVos had left a $125,000 anti-union political donation off of her disclosure forms.” See more about her record and what she did to Detroit schools below. This pick is particularly upsetting because this is about our children, the future of this country.

Start calling etc. Monday morning! If you’ve never done this before or need a pep talk read this.

First Contact your own Senator: https://www.senate.gov/senators/contact/  and Congressman/woman (Representative to the House) Find Your Representative even if you’ve contacted them about something before, do it, register your opposition.  Everyone will be voting on these confirmations Friday or next week.

Then contact members of the Senate Health Education Labor and Pensions Committee (HELP): http://www.help.senate.gov/about/members  there is a link to each members page, find their contact information and choose Washington DC office. These are the leaders of the committee:

Other members of this committee – call each one! Remind them their recommendations, the vote they take in this committee, impacts ALL OF US, not just their own constituents!

Start with the Republicans:

Here is a list of all senators phone numbers:  https://www.senate.gov/general/resources/pdf/senators_phone_list.pdf

Here is a list of all House of Representative members phone numbers and their committee assignments: http://www.house.gov/representatives/

Use Facebook and Twitter to contact each member of this committee AFTER YOU CALL and whomever else you have time to contact: http://triagecancer.org/congressional-twitter-handles/ and the GOP caucuses in the senate: @SenateGOP and house @HouseGOP.

Share your messages on social media, post on Facebook, tweet to friends, let us know what you said and how it went. Lets do this together! This is advocacy and our children need us!

The Detroit News  reports, Seven other DeVos family members combined to give the committee another $1.5 million on the same day, according to Secretary of State records. The powerful West Michigan family often coordinates contributions for maximum effect.

DeVos, 58, is a former chairwoman of the Michigan Republican Party and helped push a failed 2000 ballot proposal to amend the Michigan state Constitution to create a voucher system for students to attend nonpublic schools.

A Huffington Post article describes the effort as a failure for students, and for standards:

In the 2012 – 2013 school year 38 percent of charter schools received state academic rankings below the 25th percentile – meaning that 75 percent of all the schools in the state performed better. By contrast, only 23 percent traditional public schools fell below the 25th percentile, according to an exhaustive investigation by the Detroit Free Press. Not surprisingly, the New York Times found that the better schools are located in the richer neighborhoods. Despite these failures, DeVos fought for, and won, laws that allow Michigan’s charter schools to operate without any oversight or accountability.

While schools were failing, the program was a boom for the private companies that benefited from the program:

The majority of these are run by for-profit companies. In 2013-2014 there were 296 charters operating 370 schools in the state and 61 percent of those were run by full-service, for-profit management companies. Another 17 percent were partially run by for profits.

Kids For Sale: Betsy DeVos And The End Of Public Education

Betsy DeVos Is Coming for Your Public Schools – Newsweek

A Flurry Of Confirmation Hearings Before Trump Takes Office : NPR